This series features eighteen teams representing clubs from Scotland, Wales and England battling it out in three Divisions.
The eight teams that formed Division 1 in 2017 all return to contest the 2018 National Crown, which will be played using the Sapphire 7v7 format.

The new Division 2A will feature six teams making their first step-up from 5v5 format to play 7v7 and Division 2B is made-up of four developing teams contesting at the 5v5 format, including Sapphire new-comers the Kent Exiles Women.

BAFA Head of Women’s Football Development, Jim Messenger, said; “This series will be an exciting mixture of old rivals renewing the battle for the national crown and developing teams striving to grow to the next level of competition. I guess the biggest question for most people will be if any team can overcome four-times champions Birmingham Lions Women to steal the national title this year. But the Division 2 battle will also be intense with an intriguing look at the teams stepping-up to the larger format in 2A.”

All games are played as part of multi-team tournaments to establish the divisional rankings going in to the finals tournaments, which will all take place on 17th March 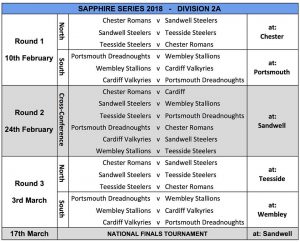