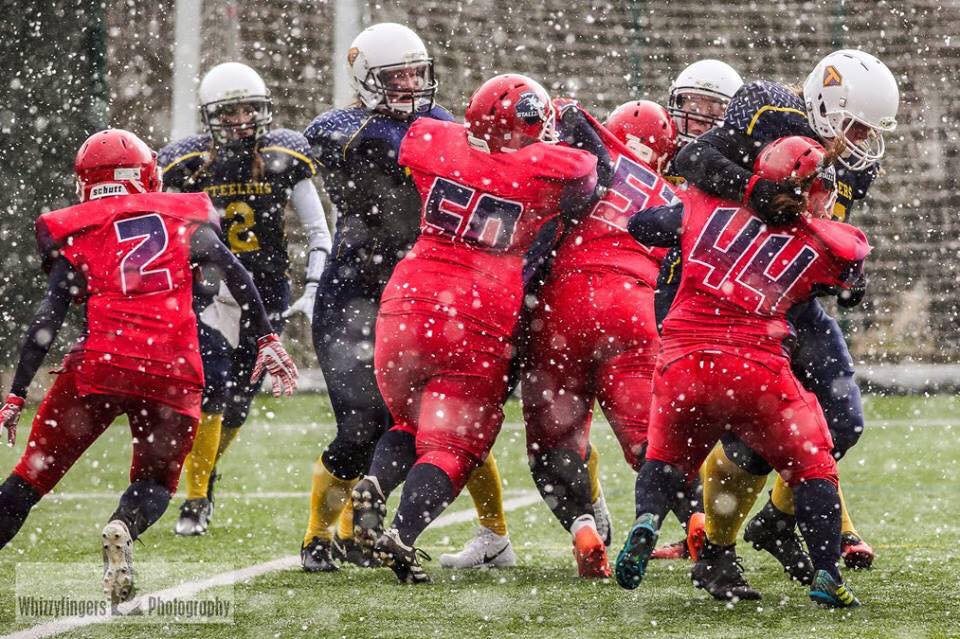 1. No one looks good in spandex
There’s a phrase in football – Look good, play well. Whilst I appreciate the sentiment, I can’t help but question its truth. Sure, there’s the aesthetic pride you feel when an action shot makes its way on to Facebook, but in reality, football is not an attractive sport. If helmets and shoulder pads weren’t bad enough, the creators of this wonderful activity decided to team it with stretchy, and often shiny, spandex leggings. In case you still feel a sense of body confidence after squeezing in to the dreaded pants, you’re then required to stuff blocks of polystyrene over your thighs and hips until you’re so bulky you feel worse than you do after powering through a whole tin of Quality Street on Christmas Day.

2. The first five minutes of training are the worst. The remaining hours are the best
After working all week, the idea of waking up early on a Saturday to run around a field isn’t very appealing. As a team, no one is happy when we’re kitting up and we often discuss why we’re so stupid to get up and do this.

3. Losing is painful but the winning makes up for it
No one likes to lose. It goes against our very nature of survival to come in second place. A loss is worse in American Football. When you have spent the last hour pushing your body to the limit and quite literally throwing yourself in the way of defeat, it hurts more than ever when the result doesn’t go your way.

4. You’ll have more WhatsApp groups than actual team mates
Offence, defence, coaches, captains… these are a few of the WhatsApp groups I’ve had over my time playing football. As a footballer, you’ll need to brace yourself for the ongoing notifications for the foreseeable future. While that may not seem too much of a plus, it’s quite nice knowing there’s always someone on the end of the phone. There’s always an answer to your question should you have one. There’s always someone up at 1am when you can’t sleep to help go through the playbook with you. It’s a support system as much as it is a team.

5. A group of strangers will become your family
Joining a new team can be nerve wracking, but after the nerves from the first few sessions have gone, you’ll start to realise just how much your team mates begin to mean to you. Sport brings people together. You understand what each other is going through, be it good or bad. You realise that despite the occasional tiredness or stresses that come with playing competitive sport, you get to spend a day of the week with some of your favourite people.

The Wembley Stallions Women’s team is holding an open taster session on Saturday 8th September from 10am – 1pm. If you are interested, please contact teammanager@wembleystallions.com.