In a game that had nearly as many turnovers as people, both Wembley Stallions and Cobham Cougars had chances to come away with the win, but neither to get that last score as the game ended at 36 all.

The first quarter ended scoreless as both defences caused the other to fumble, along with sacks from Nicolas Curto kept the visitors from moving downfield.

The Stallions’ offence were given a short field after Nathaniel Roberts intercepted a pass at the start of the second quarter. However, more solid defence prevented any gains. The home side’s offence weren’t off the field for long. A pass to Lukasz Smolen put the Stallions into the lead. Smolen also caught the two-point conversion to put the score at 8-0. 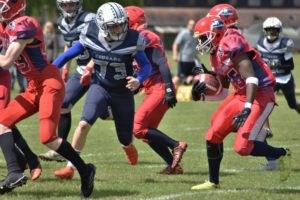 Wembley’s defence piled on the pressure when Smolen and Daniel Flore forced a fumble recovered by Curto. A sack by the Cougars pushed the Stallions back but they could not stop a pass to Mikey Williams Alonga in the end zone to increase the home side’s lead to 14-0. 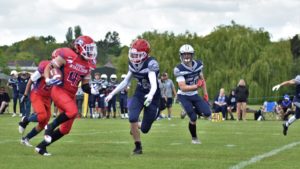 A fumble on the Stallions’ next play gave the Cougars a short field. However, they were unable to capitalise as a pass towards the end zone was picked off by Roberts at the one. Roberts took the ball all the way for a touchdown to add to the lead. The teams went in at the half with the score at 20-0.

The Cougars came out firing in the third and started to move the move downfield. Ankle tackles by Charlie Swash prevented the score, but only momentarily as the away side found momentum and put the score at 20-8.

The Stallions’ offence were stopped quickly and gave the visitors a red zone opportunity, but the Cougars’ offence couldn’t get going. A tackle from Smolen and Curto forced a fumble recovered by Flore. A pass to Reece Williamson White in the end zone and the two-point conversion pass to Smolen extended the home side’s lead to 28-8. 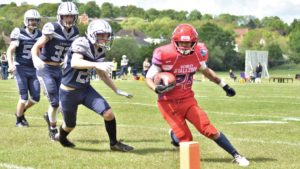 The scores narrowed again after another turnover gave the Cougars a red zone opportunity, which this time they didn’t waste. A quarterback rushing touchdown put the score at 28-14. The game became a one score game when the away side pounced on a pass to score a pick six. The two-point conversion was added to put the score at 28-22 as time expired on the third quarter.

Another forced fumble gave the Cougars the opportunity to level the scores. No mistakes as they passed the ball into the end zone to put the score at 28 all. Undeterred from seeing their lead slip, the Stallions’ went back to work. A touchdown pass to Smolen and the extras caught by Williamson White, put Wembley back in front at 36-28. 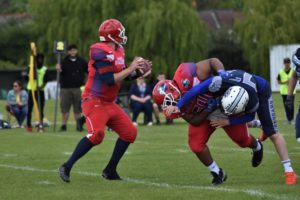 The Cougars had another chance to score as they were in the red zone, as time ticked towards the final whistle. The Stallions’ defence held firm with sacks from Curto and Isaiah Young, Cobham had no way through, and the game ended all square.