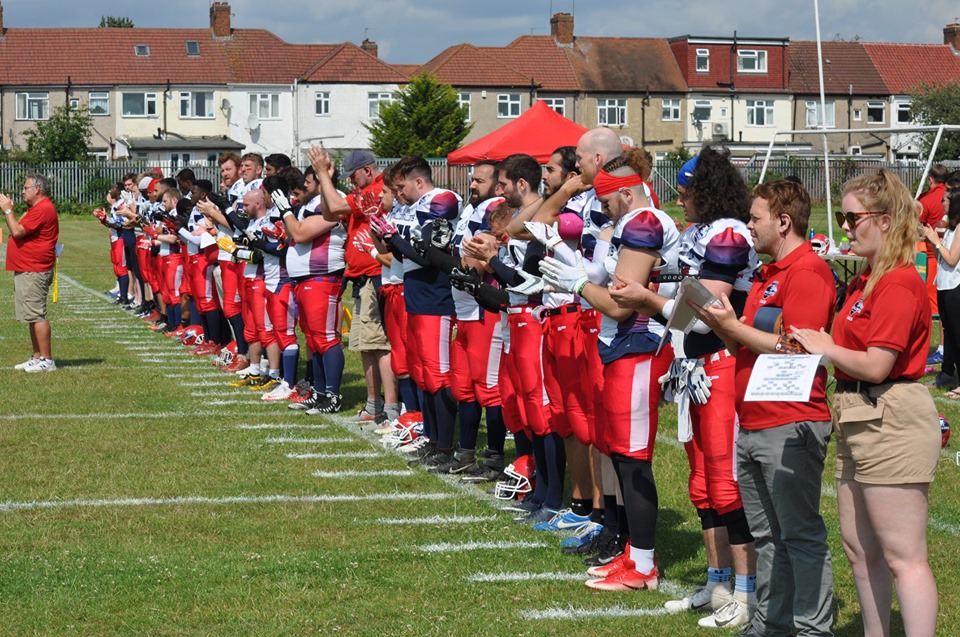 Wembley Stallions started fast, scoring two touchdowns in the first quarter. However, the London Hornets grew into the game to come back and win 14-21.

Wembley’s defence began the game well, with tackles from Duncan McAslan and Andis Mema to keep the Hornets at short gains. The Stallions’ offence came out firing to score on their opening drive for the first time this season. Mixing the plays between runs from Geraldas Kastauna and Emmanuel Olagbaju and passes to Granit Uka. The drive ended with a passing touchdown to Uka, Nick Glenday added the extras to put the score at 7-0. 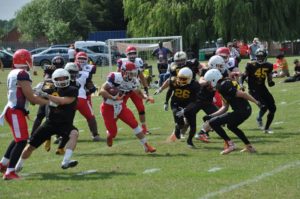 London started to move the ball, McAslan forced a fumble which the Hornets recovered, but it made the yardage unassailable. A good punt put the Stallions inside their own ten-yard line, a pass to Glenday extended the drive and a penalty on London put the home side near midfield. Kastauna broke out a 50-yard run, but fumbled as the end zone drew near, Glenday recovered the keep the ball in Stallions’ hands. Daven Abrahams finished the drive with a rushing touchdown and Glenday added the extras to increase the home side’s lead to 14-0 and end the first quarter.

The Stallions’ defence kept the pressure on the Hornets, but London started to increase the pressure on Wembley as the second quarter progressed. The away side ran and passed the ball into the red zone, a fumble at the one yard line recovered by Martin Dwamena put the ball back with the Stallions. The Hornets kept the home side at a three-and-out and punting from inside their own end zone. London didn’t waste their second chance in the red zone, scoring a passing touchdown. The extras went wide of the posts as the second quarter ended 14-6.

The Hornets’ defence attacked the line on the Stallions’ opening drive of the third, getting two sacks and were rewarded with a safety to harrow the scores to 14-8. London continued to run and pass the ball downfield, finishing the drive with a rushing touchdown. The extras were added to put the visitors into the lead at 14-15.

Both teams’ defence kept the offences to minimal gains for the rest of the third quarter. The Stallions had a chance to regain the lead midway into the fourth quarter. Brett Parnham forced a fumble during a sack and Uka had a chance to pick the ball up but missed and London recovered. The Hornets forced their own fumble following a sack, which they recovered in the end zone to extend their lead, the extras were blocked to put the score at 14-21. 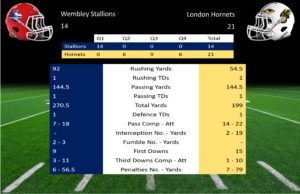 Wembley kept pushing to make a score, but London intercepted the ball to end the game and hand the Stallions their fifth loss of the season. The final game of the season is against Bury Saints and a chance to equal last year’s record or end the season with Wembley’s first losing record in their history.