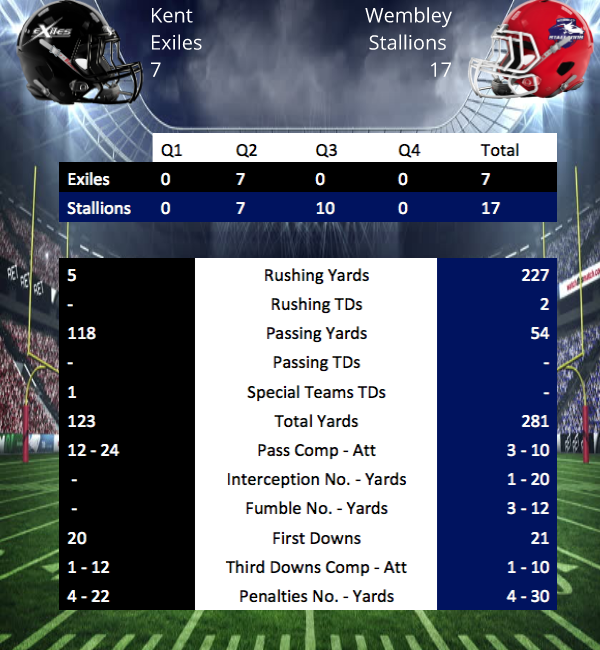 Wembley Stallions enjoyed the journey across the bridge, to have a second chance at a team that had beaten them two games ago. It was a tight affair until the Stallions started to pull away in the second half. Wembley’s defence put up a mighty 11 sacks, to put the Exiles’ offence under pressure and limited their opportunities. The Stallions came out on top recording a 7-17 victory.

The starting few drives from both sides went by quickly, with neither side gaining ground. The Stallions’ defence made a mark with three sacks from Paul Fergus, Andis Mema and Johann Johnson. As the first quarter came to an end Junior Ejehu broke out a 44-yard run to put the away side on the three-yard line.

The ball was handed to Aaron Greenidge, who fought his way into the end zone. Nick Glenday added the extras to go into the lead, making the score 0-7 at the start of the second quarter.

The Stallions looked to have the momentum, after forcing a quick three-and-out, but a fumble in the next drive put the Exiles back on near midfield. The away side’s defence kept the Exiles at a short gain. However, the resulting punt pegged Stallions on their own four-yard line. Unable to move the sticks meant attempting to punt inside their end zone. The home side pressured forcing a fumble, pouncing on the loose ball followed by a successful kick levelled the scores at 7-7.

Krystian Czadowski put the Stallions in great field position after a 47-yard return from the kick off. Moving the ball with runs from Ben Lyons, Emmanuel Olagbaju, Greenidge and Carl James to put the away side into the red zone. However, an attempted pass for a touchdown was intercepted to end the drive.

The home side were unable to move the ball ending the Half at 7-7.

Stallions started the third quarter positively with runs from Olaghaju and Ejehu and a 41-yard pass to Greenidge. The away side were in the red zone again, but were unable to get inside the ten-yard line to extend the drive after a penalty for holding pegged them back. Glenday successfully kicked the field goal to put the Stallions back in front at 7-10.

Exiles responded with big passing and running plays to put themselves on the one-yard line. But a massive defensive effort prevented the score. First a tackle on the running back by Fergus and Drew Fisher in the backfield, then a sack from Dan Tuckwell and Piers Watkins pushed the home side back. The field goal unit were sent on, but the ball fell short putting the away side back on at the 20-yard line.

On the Stallions next play the ball was handed to Ejehu, who found the seam to run in an 80-yard touchdown. Glenday added the extras to increase the lead to 7-17.

Exiles pushed forward on their next drive, but more sacks from Johnson and Fergus led to the punt team being sent on. This didn’t stop the home side from fighting, forcing a fumble and putting their offence back on the field on the eight-yard line as time expired on the third quarter.

Stallions’ backs were against the wall again, but Fergus supplied the pressure on the quarterback forcing him into the arms of Brett Parnham and his first sack of the game. The home side attempted another field goal, but it went wide as the Stallions kept their two score lead.

The away side started to run down the clock as the ball was continually placed into the running backs hands, the Exiles hadn’t given up and forced the stop. However, the Stallions’ defence were still hungry for more sacks with Parnham and Mema getting another each and Fisher getting two. The home side didn’t get another opportunity to score. The game ended with the Stallions on top, winning 7-17.

The win puts Wembley with the record of 3-4 and still with a chance to finish the season with a winning record. Next up sees the Colchester Gladiators come to the Ranch and the Stallions a chance to revenge the season opening game loss.