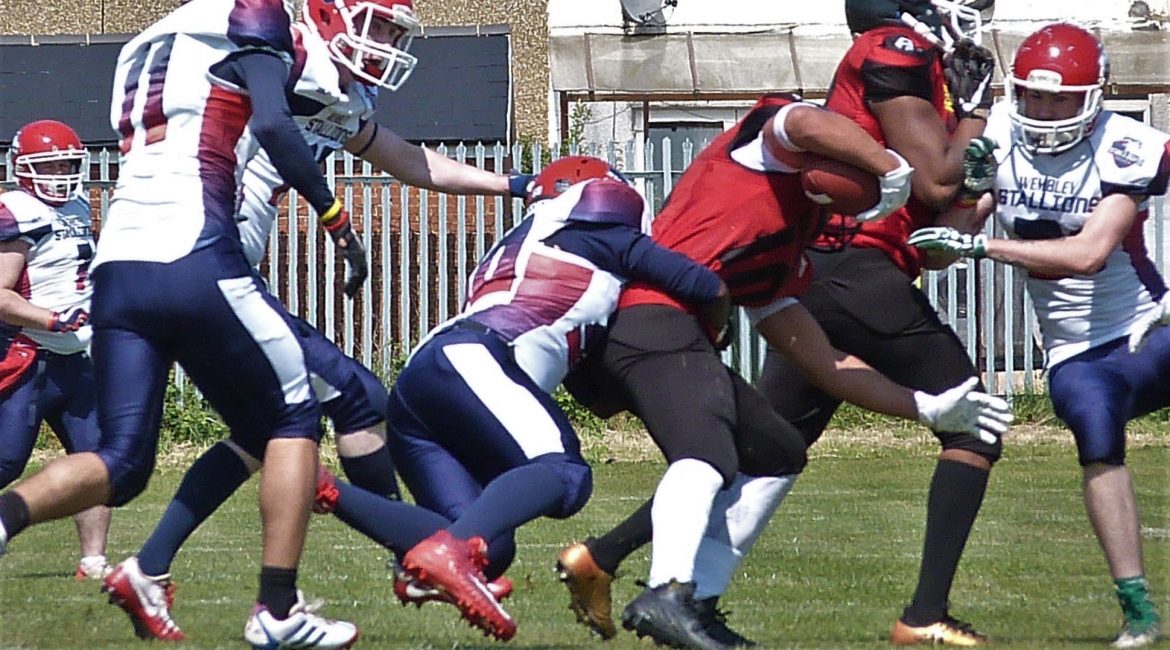 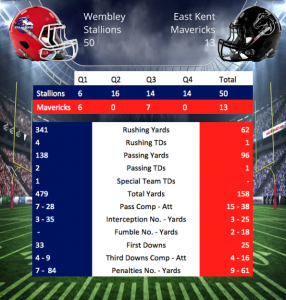 East Kent Mavericks capitalised on a slow start by Wembley Stallions, before the Stallions asserted their game to pull away for a 50-13 victory at home.

Mavericks started aggressively, putting pressure on Stallions’ quarterback Junior Price, forcing an interception. The away side took advantage of the great field position, gaining the lead with a passing touchdown. The extra point attempt went wide making the score 0-6.

Stallions bounced back quickly, running and passing the ball up the field, ending with a passing touchdown to Nick Glenday in coverage. A high snap prevented the extra point try, levelling the score at 6-6.

Duncan McAslen and Andis Mema combined to sack the Mavericks’ quarterback leading to a quick three and out. Stallions moved quickly down field with a run from Junior Ejehu and a catch from Aaron Greenidge, but more pressure on Price led to another interception.

Stallions’ defence piled the pressure on the Mavericks as time expired on the first quarter. Luke Johnson ending the drive, forcing the wide receiver to drop the pass. The home side were able to move the sticks, but could not convert on a third-and-goal. Glenday kicked straight through the uprights to put the Stallions into the lead at 9-6.

It was the Stallions’ turn to force a turnover when Martin Dwamena and Dylan Flanagan pressured the offence; James Mardlin pounced upon a high snap to put the Stallions back on the field. With great field position Ejehu ran in a 31-yard touchdown, the extra point went wide making the score 15-6.

More pressure on the Mavericks led to an interception by Seb Pettican, putting the Stallions’ offence back on the field. Runs from Ben Lyons and Ejehu put the home side just outside the end zone. However, another interception ended the drive.

Pressure on the Mavericks’ quarterback from Mardlin and Luke Streeter forced another interception caught by Glenn Trafford-Smith, giving the Stallions great field position. A pass found Greenidge in double coverage to score a touchdown; Glenday added the extras increasing the Stallions’ lead to 22-6.

Another interception by Trafford-Smith ended the away side’s chance to decrease the deficit as time expired on the second quarter.

Stallions started the third quarter strongly, with Greenidge putting the home side’s offence in Mavericks’ territory. Ejehu made use of the short field, running in for a touchdown, Glenday added the extras putting the score at 29-6.

There was an exchange of punts, before the Mavericks started to move the sticks on a variety of run and pass plays. Finishing the drive with a running touchdown, the extras were added to narrow the gap at 29-13.

The gap was not that narrow for long as Greenidge returned the kick-off to the house, Glenday added the extras making the score 36-13.

The away side had the ball going into the fourth quarter, but were unable to capitalise on penalties against the Stallions. Ejehu did not hesitate on his next chance, running in a 63-yard touchdown, Glenday added the extras increasing the Stallions’ lead to 43-13.

Mavericks moved the ball into Stallions’ territory, but again were unable to capitalise on penalties against the home side. More punt exchanges saw time dwindle on the fourth quarter, but there was still time for another score. A strip from Streeter put the Stallions just outside the red zone. More run plays from Ejehu gave him another touchdown, Glenday added the extras to give the Stallions a burger score of 50-13. The win puts Stallions’ record at 2-2 and the Mavericks at 0-3.

Stallions’ next game sees Kent Exiles visit the Ranch on the 10th June, kick-off is 2pm.