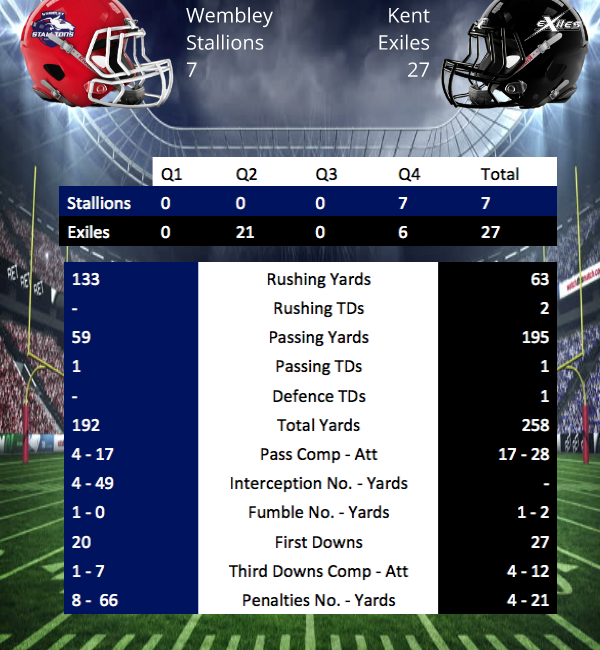 Kent Exiles scored three touchdowns in the second quarter to create an unassailable lead in an otherwise tight game, to beat Wembley Stallions 7-27.

The first quarter ended scoreless with both defences preventing any red zone opportunities. Exiles came the closest to put points on the board with a field goal, but the kick went wide.

Going into the second quarter Exiles were knocking on the door of the red zone, but two sacks from Drew Fisher and Johann Johnson pushed the away side back. A run up the middle put Exiles back just outside the red zone. Going for it on fourth down the away side’s quarterback was able to sidestep Fisher and pass for a touchdown, the kick was good putting Exiles into the lead at 0-7.

Stallions started to move the ball, mixing up the plays with Chaki Smith and Emmanuel Olagbaju taking on the run plays and Aaron Greenidge and Kenny Bello catching the pass attempts. However, the drive stalled at midfield leading to the punt team being sent on.

Exiles were able to make big chunk plays as they quickly moved down field, ending with a run into the end zone. The kick was good, increasing their lead to 0-14.

Stallions fell further behind, as a pass attempt was intercepted, putting the away side back on the field just outside the red zone. A quick throw and then a run for a touchdown followed by a successful kick put the score at 0-21. With time expiring on the first half, the home side had a mountain to climb.

Like the first, both defences dominated the third quarter. Stallions were held to a quick three-and-out, had a pass intercepted and mass pressure at the line caused a snap to be fumbled. Exiles were unable to take advantage with tackles from Johnson and a sack from Danny Hounslow, kept the away side out of the red zone.

The fourth quarter started with another Stallions’ drive ending with a pass being intercepted, putting Exiles just out the red zone. Stallions’ defence held firm leading to the away side punting. Stallions returned to the running game with Greenidge getting the home side just outside the red zone for the first time in the game. A pass found Krystian Czadowski in the end zone for a touchdown, Nick Glenday added the extra making the score 7-21.

Exiles showed their experience as they ran and passed their way down field, moving the sticks into the red zone. Unable to move any further the away side attempted a field goal, but Bello came off the edge to block, keeping it a two score game.

Stallions were unable to gain any momentum as they suffered another quick three-and-out. Frustration grew as Exiles started to move the ball again; two penalties for roughing the passer and unnecessary roughness put the away side in another scoring opportunity. Again Stallions’ defence held firm and Exiles attempted a field goal, but it sailed wide.

As time was coming to an end, Stallions wanted to end well. Instead however, the game ended with the away side getting a pick six, as they ran into the end zone after another interception, ending the game at 7-27.

Stallions now head to Cambridgeshire Cats with a 2-3 record in need of a win, whilst Exiles move up to table with their record at 3-1.