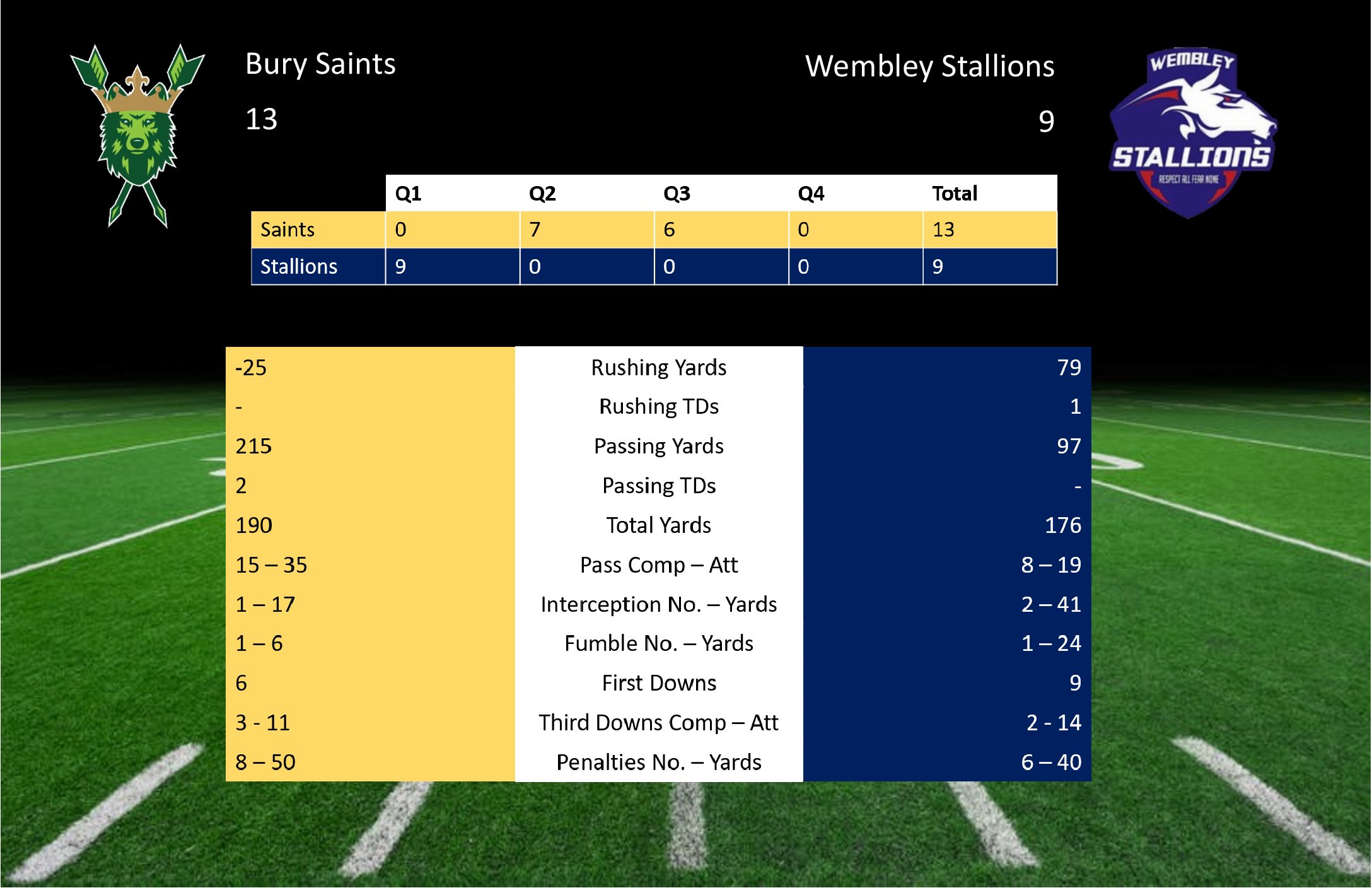 Wembley Stallions lost 13-9 at Bury Saints in the opening game of the season. The Stallions started well and built a two-score lead going into the second quarter. However, the former Premiership side came back with two touchdowns to go in front and take the win.

The Stallions’ defence started the game strongly when Sam Fraser intercepted a pass on the fourth play of the game. Wembley’s offence were unable to capitalise as the Saints’ defence forced a turnover on downs. Pressure from Stallions’ Luke Streeter told when a high snap on a Bury fourth down gave Wembley a red zone opportunity. Unable to make the yardage on the ground, Nick Glenday stepped up for a 19-yard field goal attempt and put the visitors in front 0-3. 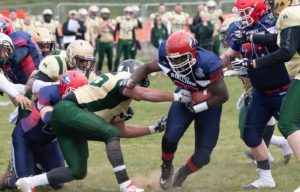 Wembley’s defence kept the pressure high as Daniel Bhunu intercepted another pass on Bury’s next play, setting up the Stallions’ offence on the five-yard line. No mistakes this time as Carl James runs in his first touchdown as a running back. The extra point was blocked putting the score at 0-9.

The Saints’ defence continued to show their steel, preventing the Stallions’ offence from building any momentum following the lead that had been built up and forced an interception. Bury’s offence were held to three-and-out and another mistake on fourth down gave Wembley another red zone opportunity. The Saints’ defence held firm and forced an error on the field goal attempt to keep the score at 0-9 as time expired on the first quarter.

The home side withstood pressure from Stallions’ Streeter and Brett Parnham and penalties for false starts to move the ball down field on their opening drive of the second quarter. On their first trip into the red zone, Bury scored a passing touchdown and added the extras to narrow the led to 7-9.

The Stallions’ offence started to move the ball nicely before the drive broke down near midfield, but were gifted another chance at a short field after a Bury backwards pass was dropped and scooped up by Wembley’s Duncan McAslan and Pietro Pastorelli. However, the Stallions’ offence were unable to capitalise and as both sides suffered three-and-outs the first half ended with the visitors having a slender lead of 7-9.

Bury made their experience show at the beginning of the second. Putting pressure on quarterback Junior Price, forcing a fumble as he scrambled for time and space to throw. The home side took advantage of the short field and their second trip into the red zone with another passing touchdown to go into the lead. The lead stayed at four points when a pass on the two-point attempt failed to reach its mark, putting the score at 13-9.

Both defences prevented any other gains until Bury’s last drive of the third quarter. A missed tackle in their own half opened the field and put them back into the red zone. More pressure from Streeter and a sack from Jerome Klein, forced the home side to send the field goal unit on. Wembley’s defence continued their great day and blocked the attempt to keep the score at 13-9.

As play moved into the fourth quarter, Wembley moved the ball down field and looked to be held outside the red zone. Lawrence Wild now in at quarterback, went for it on fourth down, completing a 21-yard pass to Glenday to set up first-and-goal at the ten-yard line. However, more penalties and a strong defence display from Bury kept the visitors from scoring.

The Stallions had another possession but were not allowed that close again, as the former Premiership side showed their grit to see out the game and start their season off with a win.

Wembley travel to the London Hornets for their next game and will look to get the win against their old rivals.