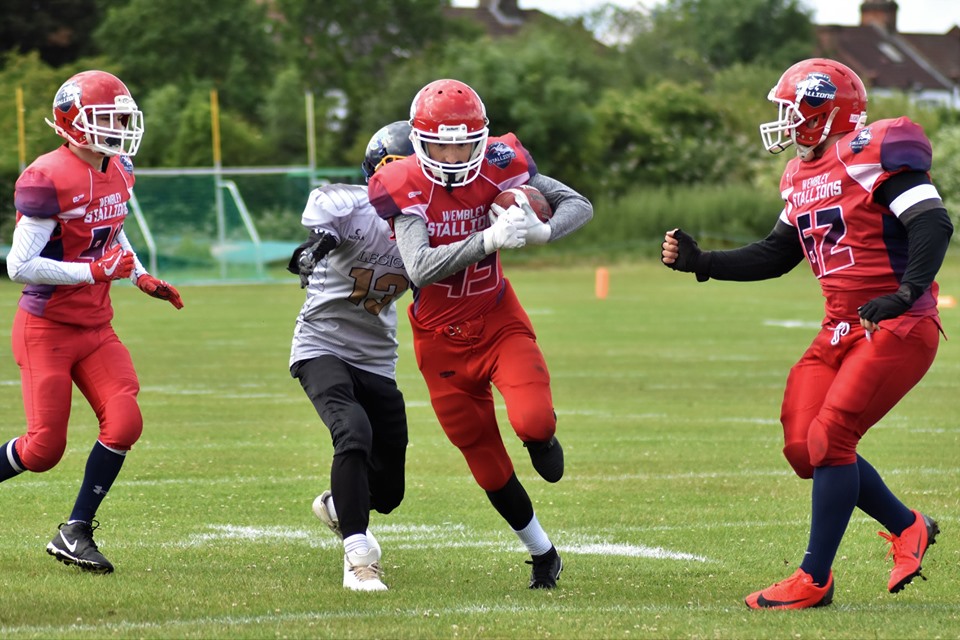 The Junior Wembley Stallions shutout the SE Legion 26-0 in a solid display at home.

The Stallions were eager to get on the field as Nicolas Curto recovered the onside kick-off to start the game. Both teams dominated on defence keeping the offence to three-and-out with Nicolas Patatas sacking the SE quarterback. The Stallions started to move the ball on the ground with Demi Etchie to the two-yard line. Quarterback Daniel Janiszewski sneaked in for a touchdown to put the Stallions into the lead at 6-0.

Wembley’s defence increased the pressure with Masi Wafa pushing SE back to their two-yard line. Reece Williamson White tackled the running back in the end zone to gain a safety, putting the score 8-0.

The momentum stayed with the Stallions as Charlie Swash forced a fumble for Jackson Turnbull to recover. SE stopped Wembley from taking advantage of the short field, however the Stallions’ defence kept up the pressure with a sack from Klaidas Vaidaugas and then a blocked punt by Daniel Flore to the Wembley back on at SE’s 15-yard line. Lukasz Smolen ran in the touchdown to put the score at 14-0.

The Stallions were quickly back on the field with a long run and then catch for a touchdown by Swash. Wembley ended the first half leading 20-0.

Wembley had the majority of the possession in the second half, a run and a pass to Smolen put the Stallions into the red zone. The drive ended with another quarterback sneak from Janiszewski to increase the Stallions’ lead to 26-0.

The game ended with a series of turnovers. SE started, intercepted the ball in the endzone, prevented the Stallions’ extending their lead. Then Vaidaugas recovered a fumble to put Wembley back on the field, but there was another intercepted pass to prevent the ball moving downfield. Finally, Vaidaugas forced a fumble recovered by Smollen to finish the game at 26-0 and give Wembley their first win of the season.