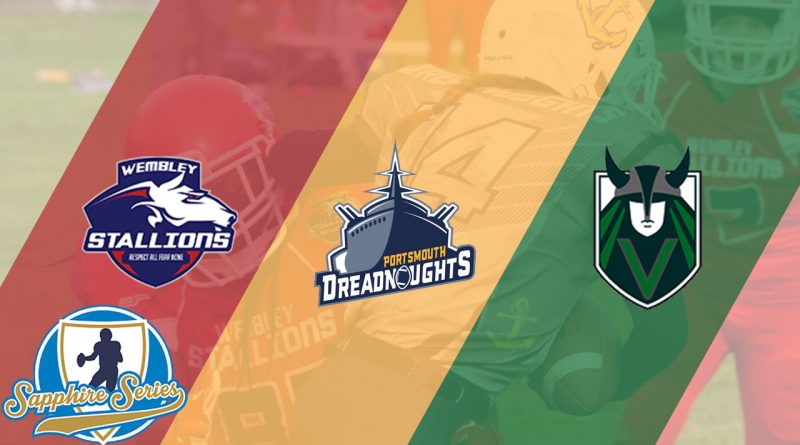 Round One for Division 2A South started as it meant to go on, with continuous downpour throughout the day! All three teams had to re-evaluate their game plans and adapt to the difficult conditions…

The first showdown in the south kicked off with Wembley and Portsmouth taking to the field, with Portsmouth winning the toss and starting with the ball. Tough conditions meant Portsmouth’s offence looked to utilise their run game but a forced fumble and recovery from the Stallions meant the Dreadnoughts failed to gain a first down in their opening drive.

The Stallions offence took to the field 8 yards from the end zone but another fumble, which led to a turnover meant the Dreadnoughts regained the ball. The first half of the game became a battle of the defences as both teams were put under pressure to defend their goal line, with impressive stops from both sides and the half finishing 0-0.

The second half saw the Dreadnoughts take the lead with Lucy Moss running in for the first touchdown of the day, followed by Steph Wyant scoring to give the Dreadnoughts a two score lead and ultimately win the game 13-0. 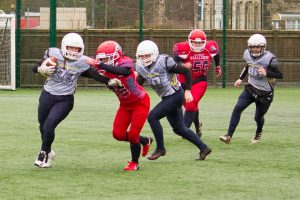 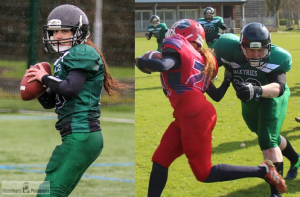 With no respite, the Stallions looked to take on the Valkyries in the second game. The Stallions defence started strong with Defensive End Demi Adesanya forcing a safety in the first few minutes. The Valkyries defence kicked off with momentum and stood up well against a strong running attack, with rookie Linebacker Ceri Yeoman making an impact and slowing the Stallions down. Ultimately a great performance from the Stallions defence sealed the deal with two defensive TDs from Martika Taylor and rookie Jovi Uysin, and five safeties’ meaning the game ended 35-0.

The final game of the day saw Cardiff take on Portsmouth. The Valkryies offence started to hit their stride as rookie RB Han O’Connor made some moves from the backfield to gain yardage. But nothing seemed to stop Izzie Clay from the Dreadnoughts who was top scorer for the day, putting away three TDs against Cardiff. Unfortunately the game was called minutes into the second half due to an injury in the Cardiff squad, meaning it finished 32-0 with the Dreadnoughts securing two wins and two shut-outs in the first round.

Comments from the teams:
Portsmouth: We are happy with the first tournament but know that we can still get a lot better. To go 2-0 is a great start but we know that if we do not improve then the season will change very quickly.

Wembley: The biggest success from our day was being able to field all our rookies, 5 of which made up our defence who put in a great performance in both games.

Cardiff: The day itself was a great learning curve for our players, many of whom are still new. When we get back to training then we will certainly be working on picking up pressure but can’t wait to get to Sandwell.

After strong defensive performances across the board, we’re excited to see how the offensive units can step up in the next round, which sees all the southern teams head to Sandwell on the 24th February to take on the North.

All of us from Division 2A wish Lois from the Valkyries a speedy recovery.