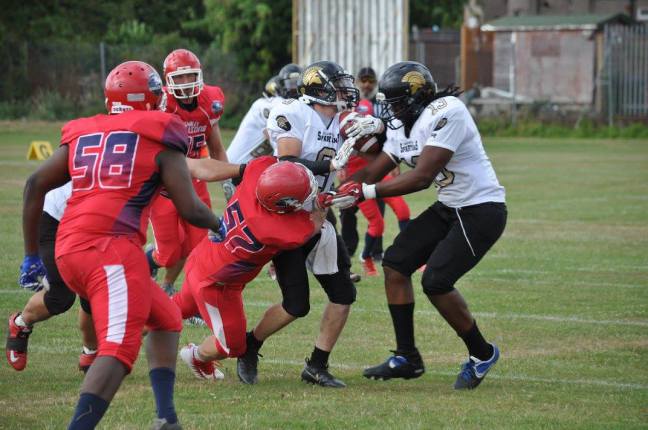 Wembley Stallions beat Essex Spartans 40-14 to go all season unbeaten at home. The win puts Wembley at 7-0 with 3 games remaining.

5 Running touchdowns from Aaron Greenidge, and a receiving touchdown by Chris Treacy were the difference between the two sides.  Wembley kicked off the game, with Essex returning the ball back to their own 27-yard line. It was a quick three and out and Wembley were soon on the field, and soon on the board.
Runs from Greenidge got Wembley into the Essex half, where quarterback Lawrence Wild threw a dime straight to Treacy to get the first touchdown of the game. 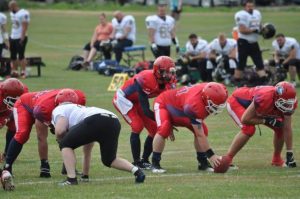 Essex tried to get back into the game. Moving the ball from their own 15 up to their 37-yard line. With 4th & 2 looming Essex decided to go for it. A sack however resulted in the possession of the ball changing hands, with Wembley taking charge on the Essex 34.

Another run by Greenidge earned Wembley a first down. He was soon to add a further six points, running into the end zone on second and goal. The failed point after attempt however meant the score was 13-0.
Wembley soon had the ball back, with Dylan Flanaghan recovering the fumbled ball on the kick return. Once again, Wembley started on the Essex 34-yard line. Wembley moved the ball all the way down into the red zone before the end of the quarter.

An array of errors put all the work to waste however. A false start penalty and a sack led to 3rd & 18. It got worse when Essex picked off the ball, returning it to the Wembley 38.

For the first time in the game Essex were in the Wembley half. However, the home sides defence was on point to show why they are undoubtedly the best defence in the division, Glenn Trafford-Smith showing up with a pick of his own.

Unfortunately, another drive for Wembley ended with a pick. This time Essex took the ball all the way in for a pick six, putting the difference between the two sides a one score game.  Wembley’s special teams did a great job of returning the kick off to the Essex 45-yard line. Turnovers once again cost the home side, this time fumbling the ball, Essex recovering.

The Wembley defence however held firm and got their offence the ball back. Greenidge took the burden of the ball, running the ball on multiple downs to give Wembley a 12-point cushion.
Essex were keen to make the game a tight affair. Starting on their own 30-yard line, they ran the ball all the way down to the Wembley 1-yard line. The bunch formations were brought out by both teams, but it was Essex who got the best. Bundling the ball over the line to make it 19-13 at half time.

Wembley received the ball to start the second half. Emmanuel Olagbaju and Greenidge were once again the work horses of the Wembley offence, with the later running in for his third touchdown of the game. 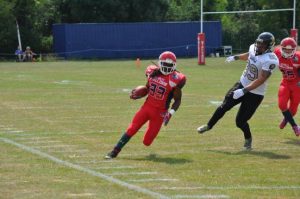 Essex started on their own 35 and moved the ball well up to the Wembley 45. Another run moved the ball up to the Wembley 34 as Essex looked to once more get back in the game. Essex were eventually brought to 4th & 11 where they set up to punt the ball. It wasn’t a punt however and was a trick play, Wembley were sharp to the decoy however and Essex failed to move the chains.

Ben Lyons was next to join in being to one to carry the workload of moving the chains for Wembley, with Tom McGinty also making a crucial catch to put the ball on the Essex 12-yard line. From there Greenidge once again took charge to put another score on the board.

Going into the last quarter Essex found themselves on the Wembley 45. Essex once again fumbled the ball which was picked up by Danny Hounslow. Wembley’s running game which had been effective all day came out once again.

McGinty once again found himself open and made a strong catch to move down to the Essex 29. Penalties and misses throws cost Wembley once more who saw the ball turn over and Essex once again take charge, looking for a miracle to come back.

It wasn’t to be however. With Wembley once again forcing a fumble through Johann Johnson, with the drive eventually seeing Greenidge get his 5th touchdown of the day.

The game ended 40-14, with the teams due to play the reverse fixture the next weekend.