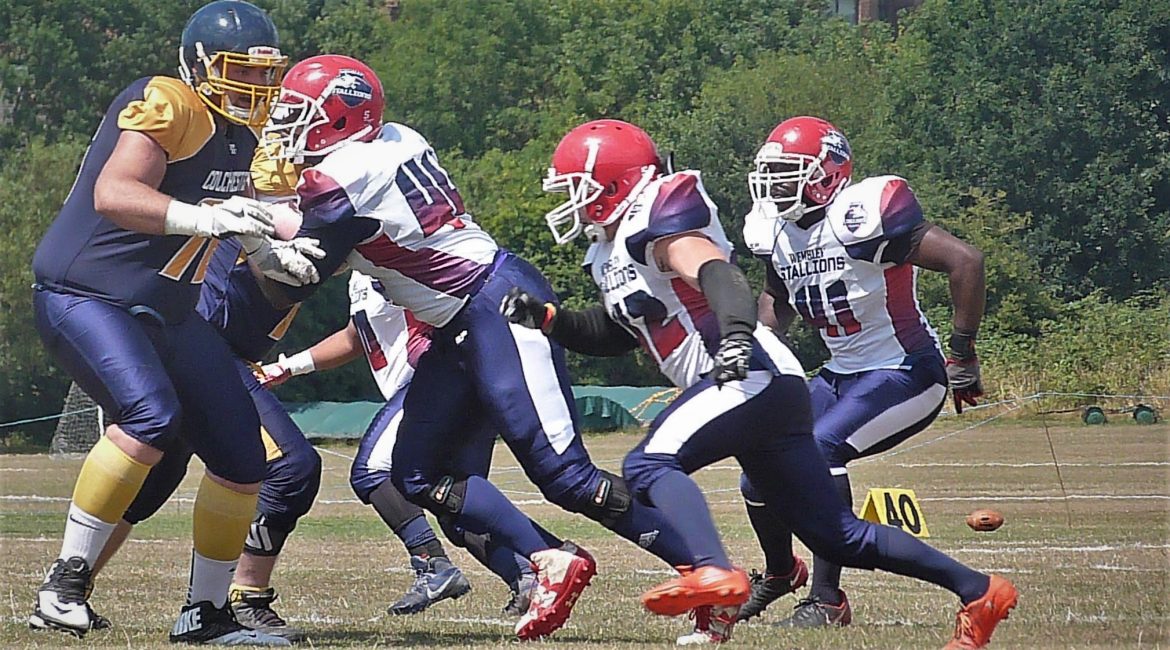 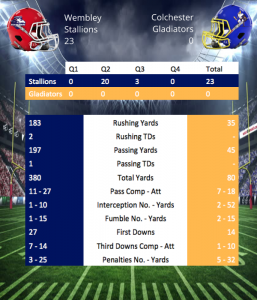 Wembley Stallions were able to gain revenge on Colchester Gladiators with a 23-0 victory.

The Stallions were eager to rectify the season opening loss. From the beginning of the game the home side’s defence put in an impressive stance, stopping the Gladiators from getting into the red zone and preventing a scoring opportunity.

The home side’s Luke Streeter set the tone on the Gladiators’ first drive, tackling the running back for no gain. Needing to punt the ball deep in their own half, the Stallions started near midfield. Strong running from Junior Ejehu, Danny Hounslow and Aaron Greenidge put the Stallions on the eight-yard line. However, the drive stalled, the field goal unit were sent on, but the ball went wide.

The Gladiators were able to move the ball on their next drive, but once over halfway Paul Fergus intercepted a pass attempt and ran back up field. As the away side recovered, the ball ended up in Piers Watkins’ hands and the Stallions back on the field in Gladiator territory.

Passes to Nick Glenday and Greenidge put the home side back on the eight-yard line as time expired on the first quarter. Ejehu ran in for the touchdown, Glenday added the extras to put the Stallions into the lead at 7-0.

The Gladiators suffered a quick three-and-out on their next drive. Adding more misery a wide snap of fourth down meant they could not complete the punt, putting the Stallions in great field position. More running from Ejehu and Hounslow gave the former another touchdown run; Glenday added the extras to increase the score to 14-0.

Tackles from Streeter and Delta Npuna put the Gladiators on negative plays, then pressure on the quarterback from Rickel Ricketts caused another quick three-and-out for the visitors. The Stallions moved the ball with a run from Hounslow before quarterback Lawrence Wild threw a 50-yard touchdown pass to Greenidge. Glenday’s kick went wide putting the score at 20-0.

Tackles from Sam Hyde, Luke Johnson and Lacean Christie kept the Gladiators at minimal gains, and then a sack by Watkins ended the drive. With time expiring on the first half, the Stallions kept the ball to ensure their three score lead.

The Stallions started the third quarter well, with strong running from Ejehu and catches by Glenday and Greenidge put them inside the red zone. However, a fumble on the next play ended the drive. The Gladiators were unable to punish this mistake as the Stallions’ defence forced a quick three-and-out ending in a sack by Streeter.

The home side moved the ball well with more runs from Ejehu and Ben Lyons and a 32-yard catch and run by Brett Parnham. The drive stalled inside the red zone, Glenday stepped up for an 18-yard successful field goal, increasing the score to 23-0.

As the fourth quarter started the Gladiators needed to score, but the Stallions’ defence didn’t give an inch with a tackle from Ricketts and a sack from Dan Tuckwell ended the drive.

The Stallions continued to move the ball down field with runs from Parnham, Lyons and Ejehu and a catch from Sharif El Fiky. However, the drive ended with an inception in the end zone.

The home side’s defence ensured the Gladiators couldn’t score forcing a fumble recovered by Streeter and a pass batted away by Seb Pettican into the hands of Dylan Flanagan to keep the Stallions firmly in control of the game. Glenday had a chance to add a 30-yard field goal, but the attempt fell short. The game ended with a Stallions shutout at 23-0.

American Football,Colchester Gladiators,nfl,Wembley Stallions
share
Travel with the Team to an Away Game
Purchase tickets