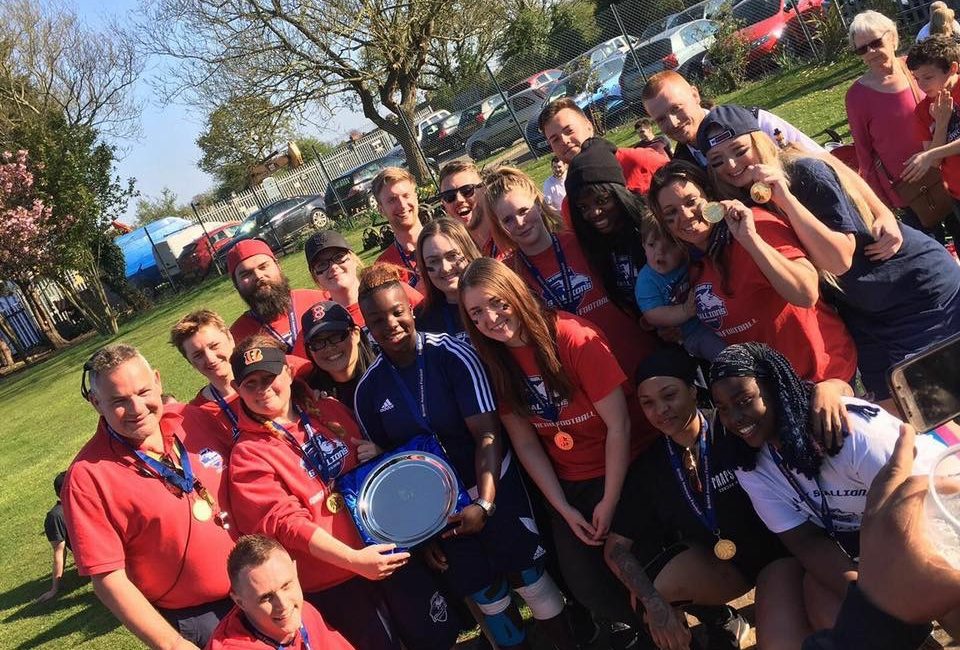 Many women (and men I’m sure) worry about joining a new sport or team for many reasons. They’re worried about not fitting in, ‘not being good’ at their sport, or about other members of their team being significantly better or more experienced than them. Perhaps they aren’t particularly confident as a person, or in their ability to play sport, and it has taken them months to pluck up the courage to go and join a new team. For women, any initial reservations about taking up a new sport are compounded by the fact that most sports are heavily male dominated, which raises a multitude of new concerns. The sport of American football, one of the sports most often perceived as being a ‘man’s world’, is therefore not the obvious choice for many women. The thought of being ignored is one thing, not to mention the fear of being harassed or made the butt of a sexist joke passed off as ‘banter’ or ‘just a bit of fun.’ These scenarios do happen in sport, and it is a shame, because teams are alienating some potentially talented athletes. But women (and men) interested in taking up the sport should take heart- it doesn’t have to play out that way.

I first became involved in American football during my final year at university. Though I was never in a situation in which I played competitively, I enjoyed joining in with kitted practices and drills alongside a small group of other like-minded women. It wasn’t until joining the Wembley Stallions that I was able to pursue contact football seriously. I can say with total honesty that I experienced none of the unfriendliness, cliques, or unfriendly behaviour I mentioned above. More importantly, the expectation from the beginning is that I would participate in all the same drills and activities as the senior men’s team. As more women joined the team, this attitude did not change. Our head coach reiterates to every new player who joins that they will be treated in exactly the same way as the male members of the organisation- discrimination, sexism, whatever you want to call it, just doesn’t figure at all. If you’re turning up to training, you’re getting stuck in with whatever everyone else is doing, regardless of gender.

Now I should preface the remainder of this article by saying that I wholly accept that there are physical, biological differences that separate men and women. Men are, typically, stronger and faster purely by virtue of being men. That’s the way it is. But in a sport like American football, there is a great deal to be said about the importance of mindset and mental state in relation to success.

In a conversation with my head coach recently, we spoke about this very issue, agreeing that there are plenty of players who join the sport without accepting just how physical it can be, which can cause all sorts of problems for them. We talk about making a ‘commitment’ to the tackle or block, or about taking ‘big hits’ during play, all of which involve considerable amounts of physical contact (we don’t wear helmets for nothing!) A player who doesn’t yet have the toughness and strong mindset will, unfortunately, struggle with this sport, both in terms of being successful and also staying healthy and injury free. I have had the chance to meet and speak with players from multiple football teams, some of which are good friends of mine. They can all tell me of situations when either they or one of their team mates has expressed a degree of uncertainty, fear, or apprehension about playing such a physical sport. In fact, I would say that anybody who says they have never felt that way, even if just for the first snap of their first ever game, is probably not being totally truthful. And there’s nothing at all wrong with feeling that way to begin with. It goes completely against the human survival instinct to put yourself in a position where you could get hurt. The key is to develop yourself mentally and physically in such a way that means fear is no longer a factor. Often, this happens naturally through experience of playing the game and getting used to the physicality of the sport- how long it takes depends on the person and the people around them.

But how does this relate to women? Am I suggesting that women lack this crucial mental skill that players need to succeed? Absolutely not. In fact, quite the opposite. Coach Smart has mentioned on multiple occasions how impressed he has been with the way female players (most of whom have joined the Stallions as total rookies) have immersed themselves in learning proper tackling technique, showing little to no ‘fear’ or nervousness. Indeed, both Coach Smart and other coaches of our team have commented that some of the women demonstrated a mental strength and toughness that some of the seniors could learn from.

The fact is, there a many factors that influence and contribute to success in sport, for both men and women. Diet, exercise, training are all key, of course. Some coaches talk about seeing ‘natural ability’ on the field, or having ‘born athletes’ on their team. This may also be true. But anyone who has played American football will always tell you how important your mentality and mindset are, both on and off the field. How well you deal with setbacks, how you process them, will be reflected in your on-field performance. In our first season in the league we dealt with losing games and players getting injured which, for a team whose players are not all experienced in dealing with those kinds of mental knocks, could have seriously impacted us going forward. But as a team, as a unit, we pulled together, we supported each other and, with the help of our coaches, we turned those knocks into success. We built up resilience with every knock- and we finished our season 5-3, coming second in our division. In our first season. If that doesn’t speak huge volumes to the importance of a positive mental attitude, I don’t know what does.

The Wembley Stallions Women’s team are holding an open taster session on Saturday 8th September from 10am – 12pm. If you are interested, please contact teammanager@wembleystallions.com.